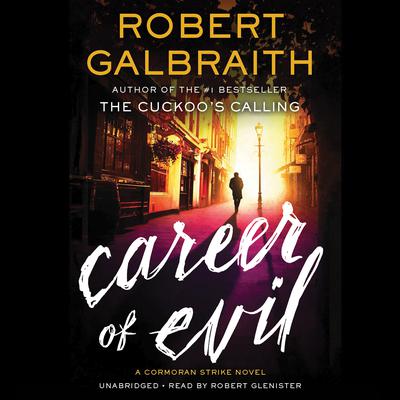 Freed by her pseudonym, J. K. Rowling immediately plunges Career of Evil into some awfully dark terrain. “Robert Galbraith’s” Cormoran Strike detective series has never shied away from grim material before. Even as the reader is shown a supermodel’s defenestration and an erotic fiction writer gruesomely murdered in the fashion of one of his characters, the imprint of the clever style and attention to detail familiar to Harry Potter fans is still present and accounted for. Much like readers were once caught off guard with Ron Weasley’s pet’s connection to the murder of Harry’s parents, in The Cuckoo’s Calling (the first novel in the series) the description of fashion items proves unexpectedly crucial to the resolution of a grizzly murder, and the resolution is all the more satisfying for it. She’s really the perfect person to write a straight up detective story.

Unlike the first two books in the series, Career of Evil wastes no time getting started. In place of a gradual mystery, we have a game of cat and mouse with increasingly complex stakes. In the first few pages a mysterious killer bent on revenge has already seduced and murdered someone before hacking off her leg and stalking the novel’s heroine with it in tow.  He mails it off to the detective agency, arresting Cormoran Strike and his partner Robin Ellacot in a media frenzy which threatens to destroy their partnership and their business as they investigate this unseen threat.

Who could have done such a thing? Strike has three guesses. That’s how rough this character’s past has been. As he investigates his stalker, Rowling frequently changes pace by giving us a few tantalizing glimpses into this mysterious misogynistic psychopath as he circles his targets, making the proceedings more of a suspenseful battle of wits than a tried-and-true whodunit. There is no risk of here of exhausted patience as you wait for the inevitable reveal.

Robert Glenister’s narration grounds the seedy material with a degree of weight and affected detachment which suits the scenario perfectly. His Cormoran Strike performance is exactly what you’d expect the world weary and lumbering detective to sound like, while all the others go down easy.

Robin, Strike’s secretary and hopeful crime solving partner has been a weakness in the series prior to this. Saddled with an extremely punchable fiancé, the unspectacular prospect of romance with Cormoran and the fact that the books failed to paint her convincingly as even a potential detective, a lot of her material only generates groans. A twist here completely recolors everything we know about her and raises the personal stakes higher than they’ve ever been. While what happens is arguably cliché, it is even harder to put the book down once we’ve seen the full truth and all its implications. By the end of Career of Evil expect to be satisfied and dying for more.