Audible’s $5.95 members-only sale: The Fifth Season, H is for Hawk, Aurora, The Grace of Kings, A Wizard of Earthsea, A God in Ruins, A Canticle for Leibowitz, and much more

Audible is having a big $5.95 members-only sale with over 200 titles, across science fiction and fantasy, non-fiction, YA, classics, and more: 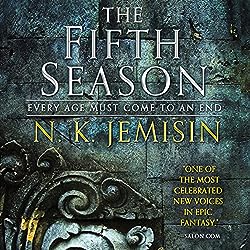 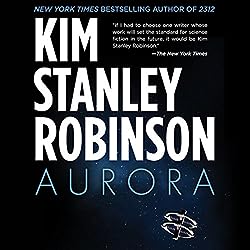 The Fifth Season: The Broken Earth, Book 1 by N.K. Jemisin, read by Robin Miles, and Aurora by Kim Stanley Robinson, read by Ali Ahn, both for Hachette Audio — Wait, WHAT? These are the two best fantasy and science fiction audiobooks (and books) from 2015. The Fifth Season begins new fantasy trilogy by Hugo, Nebula & World Fantasy Award-nominated author N. K. Jemisin, starting with a powerful magician literally ripping a volcanic rift across a continent and continuing into a moving story of a mother seeking both vengeance for her murdered sun and for signs of her missing daughter in the aftermath, and Aurora is absolutely amazing from both a generation ship and artificial intelligence perspective, along with being one of the most subtly and terrifically produced audiobooks I have ever had the pleasure of listening to. If you don’t know where to start with this sale, start here. 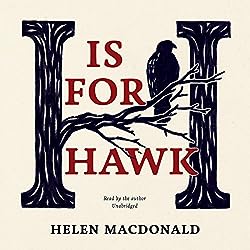 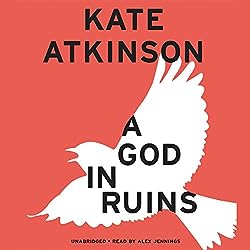 H Is for Hawk by Helen Macdonald, read by the author for Blackstone Audio is part Macdonald’s memoir of coming to terms with her father’s death, part biography of T.H. White (fascinating to me as an Arthurian interest), and part naturalist study of falconry. And her narration was beautiful on it. A unique book in my experience, and one I am glad I picked up last year. There are other non-fiction titles in the sale, but if non-fiction is your jam, here’s where I would start.

A God in Ruins: A Novel by Kate Atkinson, read by Alex Jennings for Hachette Audio is the companion to Kate Atkinson’s number-one best seller Life After Life. “Kate Atkinson’s dazzling Life After Life explored the possibility of infinite chances and the power of choices, following Ursula Todd as she lived through the turbulent events of the last century over and over again. A God in Ruins tells the dramatic story of the 20th century through Ursula’s beloved younger brother, Teddy – would-be poet, heroic pilot, husband, father, and grandfather – as he navigates the perils and progress of a rapidly changing world. After all that Teddy endures in battle, his greatest challenge is living in a future he never expected to have. An ingenious and moving exploration of one ordinary man’s path through extraordinary times, A God in Ruins proves once again that Kate Atkinson is one of the finest novelists of our age.” And: If the multiple lives / speculative fiction element of Life After Life is actually something that you didn’t like, then I would still encourage you to check out A God in Ruins. It’s basically taking just one of those timelines and making a whole, wonderful book out of it. Funny thing is I avoided reading A God in Ruins because I loved Life After Life so much, and didn’t want to sour on the book if I didn’t like the “sequel” (it’s really hard to call it a sequel, it stands alone) as much. I ended up just being amazed at what Atkinson did, at the breathtaking power of her fiction, of her literally piece by piece taking apart and using what it is that fiction can do. (I still haven’t picked up the sequel to Mary Doria Russell’s The Sparrow, even though I’ve heard so many good things about Children of Men, for a similar, stupid reason: I loved the first one so much, didn’t want anything to get tinkered with in my mind. I’ll get over it the next time it’s on sale, I hope!)

OK, those were my top four, comprising science fiction, fantasy, non-fiction, and literary fiction. Now I’ll settle in for a few handfuls more by category, starting with EPIC FANTASY: 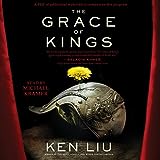 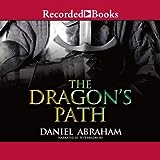 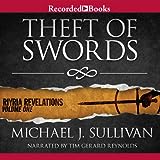 The Grace of Kings: The Dandelion Dynasty by Ken Liu, read by Michael Kramer for Simon & Schuster Audio is (somehow) Liu’s debut novel, when I feel that I have been (and I have!) been reading him for more than half a decade. Published as one of the first year launch titles from S&S’s new Saga Press, it’s a Chinese-influenced epic fantasy, which may not seem like the best match for Wheel of Time narrator extraordinaire Kramer, but he does a superb job. Emperors, generals, warlords, armies, wives, conspiracies, friendships, betrayals, humor, and violence. It didn’t quite make my top 10 of last year, though it spent most of the year flirting with it.

The Dragon’s Path: Dagger and Coin, Book 1 by Daniel Abraham, read by Pete Bradbury for Recorded Books, begins Abraham’s second epic fantasy series after his also fantastic Long Price Quartet. (If you haven’t read Abraham, you actually might have, and not known it: he’s half of the The Expanse author known as James S.A. Corey.) My fellow AudioBookaneer Dave Thompson is a huge fan of this series.

Theft of Swords: Riyria Revelations, Volume 1 by Michael J. Sullivan, read by Tim Gerard Reynolds for Recorded Books, was an Audie Award nominee in 2013 and begins Sullivan’s now long-running series(es, plural) of Riyria books, introducing  Royce Melborn and Hadrian Blackwater, “two enterprising thieves who end up running for their lives when they’re framed for the death of the king.” They’re thrust into a huge conspiracy, in a world where magic is magic.

How about some NEW SCIENCE FICTION: 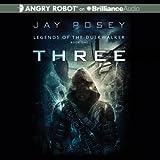 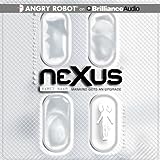 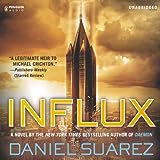 Three: Legends of the Duskwalker, Book 1 by Jay Posey, read by Luke Daniels for Angry Robot on Brilliance Audio — The eponymous “Three” is a lone wolf in a post-apocalyptic, high-tech, high-drug landscape, who against his better judgement gets between a family and the gang that’s hunting them. Bargain hunters, be aware: it’s currently an even better Whispersync deal at $1.99+$3.49.

Influx by Daniel Suarez, read by Jeff Gurner for Penguin Audio is another near-future SF thriller, which “imagines a world in which decades of technological advances have been suppressed in an effort to prevent disruptive change.” 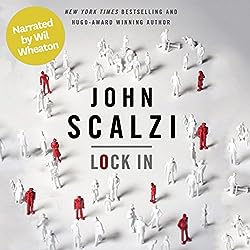 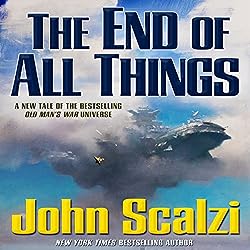 Lock In (Narrated by Wil Wheaton) by John Scalzi won AudioFile Best Voices – Sci Fi, Fantasy, and Audio Theater, 2014, and imagines a near future where “Haden’s Syndrome” leaves hundreds of thousands of people “locked in” to their bodies, but with full mental capacity to both remote control robot avatars in the real world and to surf their private Internet. One such person, Chris Shane, who also happens to be both rich and famous and the child of a political candidate, joins the FBI and is assigned to work a presumed Haden-related murder at the Watergate Hotel.

The End of All Things: Old Man’s War, Book 6 also by Scalzi, read by William Dufris and Tavia Gilbert, picks up where The Human Division left off with four novellas from four points of view, of course including CDF Lieutenant Harry Wilson.

Ready for some CLASSIC SCIENCE FICTION? Here you go: 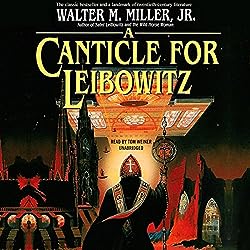 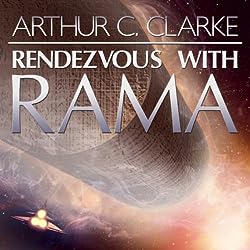 A Canticle for Leibowitz by Walter M. Miller, read by Tom Weiner for Blackstone Audio is Miller’s classic novel of nuclear fallout and the tenuous rise of civilization after the Deluge. Winner of the 1961 Hugo Award, it’s one of my favorite novels of all time.

Rendezvous with Rama by Sir Arthur C. Clarke, read by Peter Ganim, with an introduction by Robert J. Sawyer is Clarke’s 1973 classic of humanity’s mission to intercept and explore a mysterious interstellar spacecraft. Another bargain hunters, be aware: it’s currently an even better Whispersync deal at $1.99+$1.99.

How about some picks for YOUNG READERS and YOUNG ADULTS: 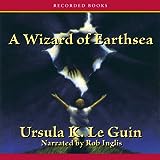 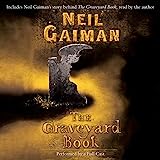 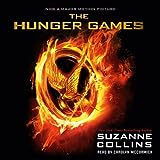 A Wizard of Earthsea: The Earthsea Cycle, Book 1 by Ursula K. Le Guin read by Rob Inglis: “Originally published in 1968, Ursula K. Le Guin’s A Wizard of Earthsea marks the first of the six now beloved Earthsea titles. Ged was the greatest sorcerer in Earthsea, but in his youth he was the reckless Sparrowhawk. In his hunger for power and knowledge, he tampered with long-held secrets and loosed a terrible shadow upon the world. This is the tumultuous tale of his testing, how he mastered the mighty words of power, tamed an ancient dragon, and crossed death’s threshold to restore the balance.” There are at least three unabridged audiobook editions of A Wizard of Earthsea, including one read by Harlan Ellison and Le Guin herself, to which I do prefer the Inglis narration, and a very hard to find edition from Craftsman read by Karen Archer, about which I’ve heard wonderful things over the years, and which I’ve not yet been able to track down. Well, the Inglis is what we have in digital audio, and at $5.95? C’mon, people.

The Hunger Games by Suzanne Collins, read by Carolyn McCormick — In the years before the films, McCormick’s voice was Katniss Everdeen for a lot of us.

All right, a quick GRAB BAG of a few handfuls more across a smattering of genres:

The Mechanical: The Alchemy Wars by Ian Tregillis, read by Chris Kayser, in which “one audacious Clakker, Jax, can no longer bear the bonds of his slavery. He will make a bid for freedom, and the consequences of his escape will shake the very foundations of the Brasswork Throne.”

Sandman Slim by Richard Kadrey, read by MacLeod Andrews is a pretty badass urban fantasy where one James Stark has come back to Los Angeles after a decade in hell, dead set on revenge against the magic circle that sent him there.

The Narrow Road to the Deep North by Richard Flanagan, read by David Atlas, tells the story of Australian surgeon Dorrigo Evans “in the despair of a Japanese POW camp on the Thailand – Burma Death Railway in 1943.”

Redeployment by Phil Klay, read by Craig Klein, is a collection of stories inspired by Klay’s experience at the frontlines of the wars in Iraq and Afghanistan.

The Power of the Dog by Don Winslow, read by Ray Porter, takes obsessive DEA agent Art Montana into the drug war both at home and inside the Mexican drug Federación; this year’s follow-up The Cartel is nearly universally-acclaimed, but I’ve been recommended strongly to read this one first.

All right! While there’s more, of course, including Matterhorn: A Novel of the Vietnam War and Bryce Courtenay’s The Power of One, I think I’d better stop here so it’s not just a regurgitation of all 200+ books.

Speaking of hundreds of on-sale audiobooks, though, this weekend also marks Downpour.com’s 100 audiobooks for $6 sale, including Jeff VanderMeer’s Annihilation, Gabriel Garcia Marquez’ One Hundred Years of Solitude, and more, including Ken Liu’s Grace of Kings, if you prefer Downpour’s DRM-free format. More on that in a direct post tomorrow.

This entry was posted in Uncategorized and tagged audible. Bookmark the permalink.