In the latest crop of the monthly 3.99 or less Kindle titles, there’s 174 Whispersync-enabled deals to check out, with no shortage of fantastic books and audiobooks from classic and current sf to epic fantasy to thrillers and more. When you add the monthly $2 or less listings with its own 52 Whispersync deals, there’s certainly a lot to tempt you as September comes to a close. And! While you’re at it, don’t forget that Audible’s $4.95 members-only “Win-Win” sale was extended through the end of the month as well, and my picks from that crop include The Hobbit and Ray Bradbury. OK, enough preamble, on to the best of this month’s Whispersync deals! (And yes, this is coming out on the last day of the month, again, sorry about that, but do get your shopping done before midnight!) 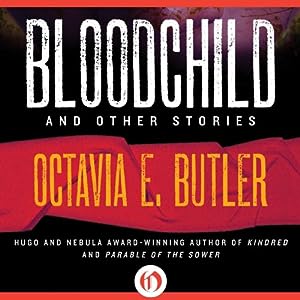 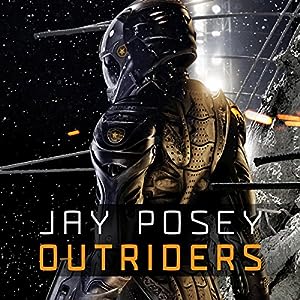 Bloodchild: And Other Stories by Octavia E. Butler, read by Janina Edwards for $1.99+$3.49 — This book, people. It’s full of amazing science fiction, from the titular “Bloodchild” on and on, with some great author’s notes and a brilliant essay to close. Edwards is a wonderful narrator for Butler’s work here, and this really is one of the 100%, guaranteed, can’t-miss audiobooks I can highly recommend.

Outriders by Jay Posey, read by James Lindgren for $2.99+$3.49 — Out not even 5 months ago, this is a fantastic start to a new series of space science fiction from Posey, the author of the post-apocalyptic Legend of the Duskwalker series. Here it’s a military sf series, with a focus on the “Outriders” a special forces group full of squad roles and tactics, read by new-to-me narrator Lindgren whose narration on this one reminded me quite a bit, in a very good way, of some of Tom Cruise’s science fictional and thriller turns on the big screen. Jack Reacher in space? With clones? “Captain Lincoln Suh died on a Wednesday. And things only got harder from there.”

More adult science fiction and fantasy titles I consider most worth checking out:

The Shrinking Man (RosettaBooks into Film) by Richard Matheson; Hell & High Water (THIRDS Book 1) by Charlie Cochet; Path of Fate (The Path Trilogy Book 1) by Diana Pharaoh Francis; Enemy (On the Bones of Gods Book 1) by K. Eason; Tea with the Black Dragon by R. A. MacAvoy (Nebula Award finalist); Succubus Heat (Georgina Kincaid) by Richelle Mead; The Last Girl (The Dominion Trilogy Book 1) by Joe Hart for $1.99+$1.99; Mechanical Failure (Epic Failure Book 1) by Joe Zieja for $1.99+$3.99 (Saga Press and Tantor Audio, read by the author); Ink Mage (A Fire Beneath the Skin Book 1 by Victor Gischler for $2+$1.9 9each (the entire trilogy); Pines (The Wayward Pines Trilogy, Book 1 by Blake Crouch, read by Paul Michael Garcia for $2+$1.99 each (the entire trilogy); and ATLAS (ATLAS Series Book 1) by Isaac Hooke for $2+$2.99.

Teen: Time’s Echo: CHRONOS Files 1.5 (The Chronos Files) by Rysa Walker, read by Nick Podehl for $0.99+$1.99 — A novella-length entry in Walker’s bestselling and award-winning CHRONOS files, which she wrapped up last year ahead of beginning an entirely new series with The Delphi Effect this fall.

Teen: Blur (Blur Trilogy Book 1) by Steven James, read by Nick Podehl for $2+$1.99 each (the entire trilogy is on sale this month) — “The isolated town of Beldon, Wisconsin, is shocked when a high school freshman’s body is found in Lake Algonquin. Just like everyone in the community, sixteen-year-old Daniel Byers believes that Emily Jackson’s death was accidental. But at her funeral, when he has a terrifying vision of her, his world begins to rip apart at the seams.”

Young Readers: The Sign of the Beaver by TK Greg Schaffert (Narrator), Elizabeth George Speare (Author) for $2.99+$3.99 — regular price of $6.95 but TK “Twelve-year-old Matt is left on his own in the Maine wilderness while his father leaves to bring the rest of the family to their new settlement. When he befriends Attean, an Indian chief’s grandson, he is invited to join the Beaver tribe and move north. Should Matt abandon his hopes of ever seeing his family again and go on to a new life?”

Thriller: Powder Burn by Carl Hiassen and Bill Montalbano, read by Robert Ramirez for $1.99+$2.99 — “A Miami man witnesses a hit-and-run—and winds up as live bait for drug smugglers—in this crime novel by the New York Times–bestselling author of Bad Monkey.”

Fiction: Pat Conroy’s The Prince of Tides, read by the legendary Frank Muller for $1.99+$3.99 — “Pat Conroy has created a huge, brash thunderstorm of a novel, stinging with honesty and resounding with drama. Spanning forty years, this is the story of turbulent Tom Wingo, his gifted and troubled twin sister, Savannah, and their struggle to triumph over the dark and tragic legacy of the extraordinary family into which they were born.”

Fiction: Illumination Night: A Novel by Alice Hoffman, read by Suzanne Toren for $2.51+$3.99 — “Beginning on the night of the Grand Illumination, a festival of lanterns held each summer on Martha’s Vineyard, this novel is a modern chronicle of a marriage and a bittersweet exploration of an extraordinary passion. Illumination Night follows the lives of a young blond giant who is as beautiful as he is frightening; an old woman at the end of her life whose last mission is to save her granddaughter’s soul; a family torn apart by a wife’s fears and a husband’s unrealized desires; and the high school girl who comes to Martha’s Vineyard against her will, who steals husbands and cars, and who will bring everyone together in a web of yearning, sin, and ultimate redemption.”

Fiction: Jose Saramago’s The Elephant’s Journey for $2.99+$3.99, read by Christine Williams — “A delightful, witty tale of friendship and adventure from prize-winning novelist Jose Saramago. In 1551, King Joo III of Portugal gave Archduke Maximilian an unusual wedding present: an elephant named Solomon. In Jose Saramago’s remarkable and imaginative retelling, Solomon and his keeper, Subhro, begin in dismal conditions, forgotten in a corner of the palace grounds.”

Penultimately, since this is coming out the very last day of the month anyway, today’s daily Whispersync deals and today’s Audible daily deal:

Paul Antony Jones’ Extinction Point series for $1.99+$3.99 each, read by Emily Beresford: “First comes the red rain: a strange, scarlet downpour from a cloudless sky that spreads across cities, nations, and the entire globe. In a matter of panicked hours, every living thing on earth succumbs to swift, bloody death. Yet Emily Baxter, a young newspaper reporter, is mysteriously spared—and now she’s all alone.”

Pam Brondos’ Gateway to Fourline trilogy for $1.99+$1.99 each, read by Lauren Ezzo: “Years before, a gateway opened between their world and ours. Sending one young woman through may be the key to survival for the kingdom of Fourline. Strapped for cash, college student Natalie Barns agrees to take a job at a costume shop. Sure, Estos—her classmate who works in the shop—is a little odd, but Nat needs the money for her tuition. Then she stumbles through the mysterious door behind the shop—and her entire universe transforms.”

Today’s Audible “daily deal” is a good one for scifi fans: Finty Williams reading M.R. Carey’s (also known as comics writer Mike Carey) The Girl With All The Gifts for $2.95 –“Every morning, Melanie waits in her cell to be collected for class. When they come for her, Sergeant keeps his gun pointing at her while two of his people strap her into the wheelchair. She thinks they don’t like her. She jokes that she won’t bite, but they don’t laugh. Melanie loves school. She loves learning about spelling and sums and the world outside the classroom and the children’s cells. She tells her favorite teacher all the things she’ll do when she grows up. Melanie doesn’t know why this makes Miss Justineau look sad.”

Lastly, a few more random titles on sale as of this writing:

The Best of All Possible Worlds by Karen Lord, read by Robin Miles for $1.99+$4.49 — “A proud and reserved alien society finds its homeland destroyed in an unprovoked act of aggression, and the survivors have no choice but to reach out to the indigenous humanoids of their adopted world, to whom they are distantly related. They wish to preserve their cherished way of life but come to discover that in order to preserve their culture, they may have to change it forever. Now a man and a woman from these two clashing societies must work together to save this vanishing race—and end up uncovering ancient mysteries with far-reaching ramifications. As their mission hangs in the balance, this unlikely team—one cool and cerebral, the other fiery and impulsive—just may find in each other their own destinies . . . and a force that transcends all.”

Viriconium for $1.99+$4.49 by M. John Harrison, read by Simon Vance, with an introduction by and read by Neil Gaiman: “Award-winning author, narrator, and screenwriter Neil Gaiman personally selected this book, and, using the tools of the Audiobook Creation Exchange (ACX), cast the narrator and produced this work for his audiobook label, Neil Gaiman Presents. A few words from Neil on Viriconium: ‘Viriconium is three novles and a short story collection, spanning much of M. John Harrison’s illustrious career – what an ambitious task to imagine an alternate version of someplace that may be London, albeit a punk-sensibility London in a post-apocalyptic future. It’s as if Mike Harrison remembered a place that will never exist, or at least not for millennia, and fleshed it out with art and legends and glorious gods hiding amidst the population.'”

#FreeKindle Deal: Justice Calling (The Twenty Sided Sorcess Book One) by Annie Bellet and read by Folly Blaine for $0+$1.99, and Book 2, Murder of Crows, is listed for $0.99+$1.99. (And then, hey, Book 3, Pack of Lies, is $2.99+$1.99…) “Gamer. Nerd. Sorceress. Jade Crow lives a quiet life running her comic book and game store in Wylde, Idaho. After twenty-five years fleeing from a powerful sorcerer who wants to eat her heart and take her powers, quiet suits her just fine. Surrounded by friends who are even less human than she is, Jade figures she’s finally safe. As long as she doesn’t use her magic.”

#FreeKindle Deal: Bone And Cinder: A Post-Apocalyptic Thriller (Zapheads, Book 1) by Scott Nicholson and Joshua Simcox, read by Kevin Clay for $0+$1.99 — First in a spin-off series, a thriller set in the bestselling AFTER post-apocalyptic world.