“The past can’t be changed, but it can be learned from.” — James reviews Snapshot 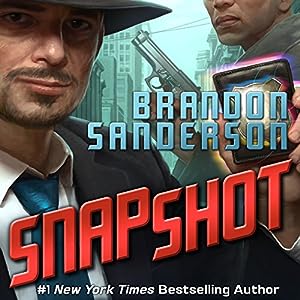 Snapshot
By Brandon Sanderson
Narrated by William DeMeritt for Audible

Snapshot is one of those books you know will probably be a movie soon right away. I mean that in the best possible sense, the premise is just too good. In a city of millions, detectives Davis and Chaz are the only real people. Cops in this futuristic world have taken to using “Snapshots”, large scale, holodeck-like re-creations of the past to solve crimes.

Let’s say a murder is committed Monday with no witnesses. On Tuesday, the police could send detectives into a holographic simulation of the day, where they can follow the suspect and find out where he stashed the murder weapon. From there, a call to officers in the real world could break the case. The past can’t be changed, but it can be learned from.

You can be killed in the simulation, but there are no consequences in the real world — do anything, kill anyone, it won’t matter. But step on too many butterflies and the simulation might diverge too far from reality to be useful.

Chaz and Davis, two cops whose failures in the real world relegated them to serving the department in the simulation, have their own views on the merits of the system, with Chaz being all-too-willing to revel in consequence-free police work. Their curiosity about a previous day’s events outside normal investigations leads them down the trail of a serial killer who has specifically designed his murders to evade snapshot detectives like them.

Running at just over two hours, the audiobook doesn’t last long enough for some of the intriguing mythology to play out in detail. Information about the system and its implications are teased, but never fully explained. This might frustrate some readers, but it also allows the murder mystery to move forward unobstructed, and at exactly the right pace that the listener doesn’t have time to beat the story to its conclusion. The rapid-fire twists towards the end that perked up my ears and had me doing double-takes would have been easy to guess in a ten hour book.

As soon as you think that both you and the book have meditated enough on what it would really mean to relive a day,  a flood of new possibilities arise, along with the realization that it could go beyond even that. It is the kind of story you might want to relive to pick apart as soon as you’re finished.

William DeMeritt imbues the narration with a heavy dose of noir and grit. It’s perfectly immersive given the subject matter. He isn’t called on to do many female voices, but it goes smoothly when he does. For sci-fi fans, this will go down as one of the easiest listens of the year.