Ever Felt Like a Convention Wanted to Kill You? — Dave Reviews I Am Providence 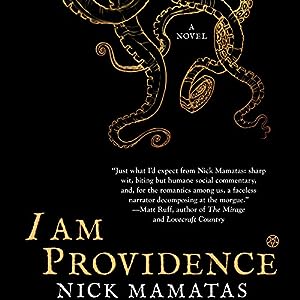 The first convention I ever went to was San Diego Comic Con, right around 1998. It was a huge deal, but you could still buy tickets easily enough and you didn’t have to camp out overnight waiting to get into the panels. But it was enormous, and it was crowded. The second convention I went to was a small SF/F/H literary con also in San Diego, where the panels averaged about 10-20 guests. I remember being shocked to see such a small turn out for some pretty amazing authors.

If you’ve ever been to a similar convention, or if you follow SF/F/H fandom closely, then this book is for you.

The Summer Tentacular convention celebrates the works of H.P. Lovecraft, while the attendees argue with each other about his legacy. As a wordsmith, Lovecraft was terrifying. As a human being, he was a pretty awful racist, and that perspective bled over into some of his fiction. At the Summer Tentacular, we meet our two narrators: up and coming horror author Colleen Danzig and her newly murdered, newly faceless roommate Panossian — who was murdered Panossian during the convention.

Why did someone kill Panossian? Maybe because he had a book bound in human flesh he was looking to sell? Or maybe because he was an asshole? Or…both? The local police are acting a bit weird, so Colleen takes it upon herself to investigate Panossian’s murder among her fellow convention goers, if she can survive the con herself. It sounds like a thriller, and to some extent that’s what it is, but for people who have been following fandom and the field of SF/F/H lately, it’s also pretty hilarious in a dark sort of way. Sad Puppies, convention sexual harassment policies, “fake” fans, the need for diversity in fandom and fiction, internet flame wars segueing into death threats…I mean, as I type this list up, I know in my head these aren’t actually funny — they kind of keep me up at night. But author Nick Mamatas’s portrayal of it all had me cracking up throughout the novel. That’s some kind of dark and delicious magic right there.

It’s impossible for me to talk about this book without talking about Nick Mamatas himself. From the opening chapter, it seems clear that Panossian is a stand-in for Mamatas — which is pretty funny since when we first meet Panossian he’s dead and in morgue, his face recently sliced off. Panossian wrote a cult-favorite Lovecraftian pastiche called The Catcher in Ry’leh (a Catcher in the Rye/Lovecraft mash-up). Mamatas wrote the excellent Move Underground (a Jack Kerouac/Lovecraft mash-up). They both have sharp, witty, angry, and often offensive online personalities which result in a lot of people being pissed off at them. And it’s a lot of fun to see Mamatas mining all of that into his novel to make something both accessible and entertaining.

Joel Richards is great as the dead Panosian, complete with his post-mortal world-weary snark. (A dead author can snark can with the best of them.) That said, Rachel Jacobs does a particularly great reading not only from Colleen’s perspective, but also bringing to life the bizarre cast of characters from the Summer Tentacular. If someone murdered me, I’d hope Jacobs would pounding the convention floor trying to find out who the killer is. (And I’d also hope I could sound as snarky as Richards does, even after I’m dead.)

If you’re a part of SF/F/H fandom, I can’t recommend this book enough. It’s funny and smart, skewering Lovecraft and his culture while celebrating it in the most awkward way possible. I hope we get more like this from Mamatas in the future.