JANUARY 8-14, 2014: This week the name of the game is “fantasy”, though near-future noir (Shovel Ready), the latest Peter Clines (Ex-Purgatory, read by Jay Snyder), classic sf from Asimov (read by Scott Brick) and Vonda McIntyre (read by Gayle Hendrix), and most singularly the Frederik Pohl tribute anthology Gateways (read by the voice of Pohl’s Gateway, Oliver Wyman) do make for a more diverse range of offerings. But the lion’s share of my picks this week? There are swords, there are blades, there are knights, and there is blood. Even into the “also out this week” listings: there are cold mages (Kate Elliott’s Cold Fire), there are thieves, there are more swords (David Dalglish’s Dawn of Swords), and there is even a kaiju sighting. (Whether you want to shelve that last into fantasy or sf is, of course, be up to you.) And, as last week, there’s another highly-anticipated Africa-set fiction novel, Foreign Gods, Inc. by Okey Ndibe. This week’s picks are also voiced by some of the best narrators in the business, so you’re in for a treat whichever way you turn. Unless of course you were hoping for one of the “seen but not heard” books (JM McDermott’s Maze, Kathe Koja’s The Mercury Waltz, or Rachel Cantor’s A Highly Unlikely Scenario) or are on the US side of the digital regional divide and were hoping for The Girl with All the Gifts which is now out in audio in the UK. Sadly there’s not even a physical audiobook edition to import, so the long wait for the June US release begins. Ticktock!

This book wasn’t even on my radar until Tuesday morning, but the more I read about Shovel Ready by Adam Sternbergh and the more I enjoy Arthur Morey‘s gravelly narration, the more I’m taken in by this tightly-wound (under 7 hours) crime novel, out from Random House Audio concurrent with the print/ebook release from Crown. “The futuristic hard-boiled noir that Lauren Beukes calls ‘sharp as a paper-cut’ about a garbage man turned kill-for-hire. Spademan used to be a garbage man. That was before the dirty bomb hit Times Square, before his wife was killed, and before the city became a blown-out shell of its former self. Now he’s a hitman. In a near-future New York City split between those who are wealthy enough to “tap in” to a sophisticated virtual reality, and those who are left to fend for themselves in the ravaged streets, Spademan chose the streets. His new job is not that different from his old one: Waste disposal is waste disposal.  He doesn’t ask questions; he works quickly; and he’s handy with a box cutter. But when his latest client hires him to kill the daughter of a powerful evangelist, his unadorned life is upended: His mark has a shocking secret and his client has a sordid agenda far beyond a simple kill. Spademan must navigate between these two worlds—the wasteland reality and the slick fantasy—to finish his job, clear his conscience, and make sure he’s not the one who winds up in the ground.”

The Emperor’s Blades (Chronicle of the Unhewn Throne) by Brian Staveley, read by the always fantastic Simon Vance for Brilliance Audio concurrent with the print/ebook release from Tor. There have been excerpts going up on Tor.com for several months now as well as a free 7-chapter ebook preview for this debut novel, first in a new epic fantasy series, which “follows siblings Valyn, Kaden, and Adare, who are in different parts of the world when they learn about the assassination of their father, the Emperor. All of them are in danger of being the next targets, and all of them are caught in the maelstrom of conspiracy, intrigue, treachery, and magic that sweeps through Staveley’s auspicious debut novel.”

He Drank, and Saw the Spider: An Eddie LaCrosse Novel by Alex Bledsoe, read by the also always fantastic Stefan Rudnicki for Blackstone Audio, concurrent with the print/ebook release from Tor: “Alex Bledsoe continues the adventures of freelance sword jockey Eddie LaCrosse in the thrilling He Drank, and Saw the Spider. After he fails to save a stranger from being mauled to death by a bear, a young mercenary is saddled with the baby girl the man died to protect. He leaves her with a kindly shepherd family and goes on with his violent life. Now, sixteen years later, that young mercenary has grown up to become cynical sword jockey Eddie LaCrosse. When his vacation travels bring him back to that same part of the world, he can’t resist trying to discover what has become of the mysterious infant.” 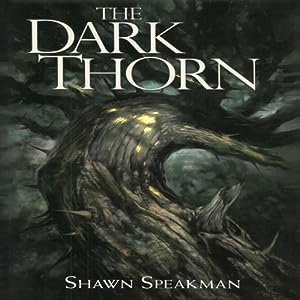 The Dark Thorn By Shawn Speakman, Narrated By Nick Podehl for Audible is the Unfettered editor Speakman’s 2012 debut novel, narrated by the voice (in the US) of Pat Rothfuss’s The Name of the Wind.  “Beneath the streets of Seattle, a long-forgotten war is about to be renewed…Richard McAllister, a spiritually destitute homeless man and Knight of the Yn Saith, protects one of seven portals linking his world to that of Annwn, where the fey Tuatha de Dannan of antiquity have been relegated by a long-running religious war. Unknown to Richard though, powerful forces are aligning against him and all he stands to keep safe.” Reviews are a bit mixed, but on the strength of Podehl’s narration I’ll forgive a few debut novel imperfections. (And it’s a $1.99 Whispersync upgrade for those who have the Kindle edition, which doesn’t hurt, either. And! Unfettered is coming to audio next week, so look for more mentions of Speakman in roughly 7 days, and also look for this: “Many of the contributors will be hosting audiobook giveaways.” Do stay tuned…)

Gateways: Original New Stories Inspired by Frederik Pohl edited by Elizabeth Anne Hull, with stories from Greg Bear, Gregory Benford, Ben Bova, David Brin, Cory Doctorow, Neil Gaiman, Joe Haldeman, Harry Harrison, Larry Niven, Vernon Vinge, and Gene Wolfe, all narrated by absolutely the perfect choice for this project, Oliver Wyman, for Audible Frontiers. What makes Wyman such a good choice? Well, for one, his range and past work already make him one of my favorite narrators, but he’s also a huge fan of Pohl’s work himself, as well as the narrator both of Pohl’s 5-book Heechee Saga (including Gateway, from which this tribute anthology gets its title) and the late and beloved Pohl’s last novel, All the Lives He Led: A Novel. Here, a wide-ranging (from hard sf to satire and back again) anthology from so many of the authors who were inspired by Pohl’s work. 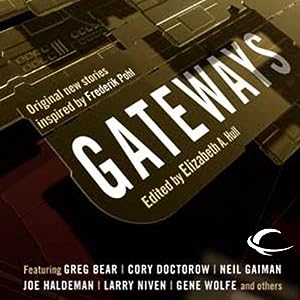 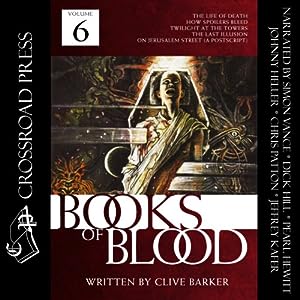 Lastly, out last Wednesday was The Books of Blood: Volume 6 By Clive Barker, Narrated By Simon Vance, Dick Hill, Johnny Heller, Pearl Hewitt, Chris Patton, and Jeffrey Kafer for Crossroad Press — now all 6 volumes are in audio, narrated by an all-star cast. “In this, the sixth and final volume of Clive Barker’s Books of Blood, with a new introduction by Mark Miller, five new stories of darkness unleashed: “The Life Of Death” – Hidden in the crypt of a derelict church she found Decay and Corruption in hits terrible glory. But such glamour can prove infectious…. “How Spoilers Bleed” – They committed a crime no jury could convict them for. But there were other judges…other punishments… “Twilight At The Towers” – Ballard was the perfect spy. A man with all the cunning of an animal. Or was it vice-versa? “The Last Illusion” – (A Harry D’Amour novella) – New York had shown Harry horrors enough for a dozen lifetimes. He thought he’d seen the worst that flesh could suffer. Then the beautiful widow walked into his life, with a husband who wouldn’t lie down dead, and all Hell on her hells. And suddenly Harry was face to face with forces that could teach Manhattan a lesson in depravity. “On Jerusalem Street” (a Postscript) – After the end, a new beginning: Walking the highway of the dead…” 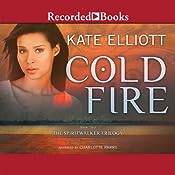 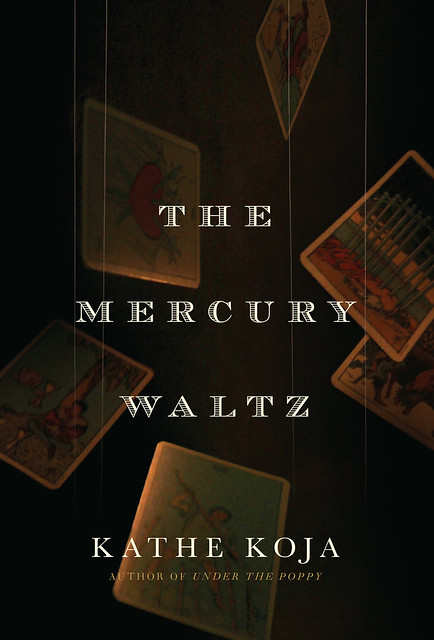