Friday, January 24, 2014: Four more deals to share today, starting with Celebromancy: Ree Reyes, Book 2 by Michael R. Underwood, narrated by Mary Robinette Kowal for Audible Frontiers, book two in the series after Geekomancy and on sale for $1.99 Kindle, offering a $1.99 Whispersync for Voice upgrade to the Audible edition. “Things are looking up for urban fantasista Ree Reyes. She’s using her love of pop culture to fight monsters and protect her hometown as a Geekomancer, and now a real-live production company is shooting her television pilot script. But nothing is easy in show business. When an invisible figure attacks the leading lady of the show, former child-star-turned-current-hot-mess Jane Konrad, Ree begins a school-of-hard-knocks education in the power of Celebromancy. Attempting to help Jane Geekomancy-style with Jedi mind tricks and X-Men infiltration techniques, Ree learns more about movie magic than she ever intended.” 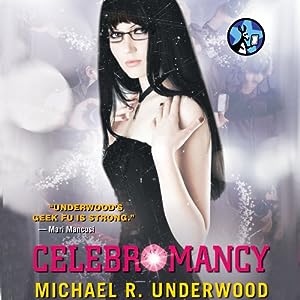 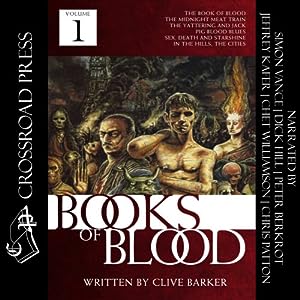 Next up, fresh off a fantastic review of Book 3 in AudioFile, and the release of Book 5 last week, is The Books of Blood, Volume 1 by Clive Barker, narrated by Simon Vance, Dick Hill, Peter Berkrot, Jeffrey Kafer, Chet Williamson, and Chris Patton for Crossroad Press, on sale through Feb 2 for $2.99 in Kindle and offering a $1.99 Whispersync for Voice upgrade to the Audible edition. “Weaving tales of the everyday world transformed into an unrecognizable place, where reason no longer exists and logic ceases to explain the workings of the universe, Clive Barker provides the stuff of nightmares in packages too tantalizing to resist. This first volume contains the short stories ‘The Book of Blood’, ‘The Midnight Meat Train’, ‘The Yattering and Jack’, ‘Sex, Death, and Starshine’, and ‘In the Hills, the Cities.'”

More blood? House of Bathory By Linda Lafferty, Narrated By Kathleen Gati for Brilliance Audio, an historical/vampire mystery, on sale (also through Feb 2) for $3.99 in Kindle, with a $0.99 Whispersync for Voice upgrade to the Audible edition. “In the early 1600s, Elizabeth Báthory, the infamous Blood Countess, ruled Čachtice Castle in the hinterlands of Slovakia. During bizarre nightly rites, she tortured and killed the young women she had taken on as servants. A devil, a demon, the terror of Royal Hungary—she bathed in their blood to preserve her own youth.  400 years later, echoes of the Countess’s legendary brutality reach Aspen, Colorado. Betsy Path, a psychoanalyst of uncommon intuition, has a breakthrough with sullen teenager Daisy Hart. Together, they are haunted by the past, as they struggle to understand its imprint upon the present. Betsy and her troubled but perceptive patient learn the truth: the curse of the House of Bathory lives still and has the power to do evil even now. The story, brimming with palace intrigue, memorable characters intimately realized, and a wealth of evocative detail, travels back and forth between the familiar, modern world and a seventeenth-century Eastern Europe brought startlingly to life. Inspired by the actual crimes of Elizabeth Báthory, The House of Bathory is another thrilling historical fiction from Linda Lafferty (The Bloodletter’s Daughter and The Drowning Guard). The novel carries readers along with suspense and the sweep of historical events both repellent and fascinating.” 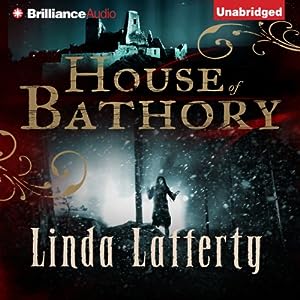 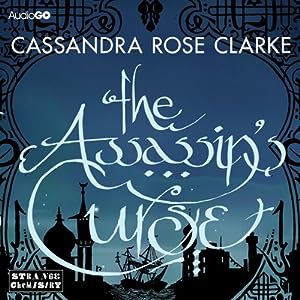 Lastly, The Assassin’s Curse By Cassandra Rose Clarke, Narrated By Tania Rodrigues for AudioGO. Out from Angry Robot’s YA imprint Strange Chemistry in 2012, it’s on sale (again, also through Feb 2) in Kindle for $1.99, with a $3.49 Whispersync for Voice upgrade to the Audible edition. “Ananna of the Tanarau abandons ship when her parents try to marry her off to an allying pirate clan: she wants to captain her own boat, not serve as second-in-command to her handsome yet clueless fiance. But her escape has dire consequences when she learns the scorned clan has sent an assassin after her. And when the assassin, Naji, finally catches up with her, things get even worse. Ananna inadvertently triggers a nasty curse — with a life-altering result. Now Ananna and Naji are forced to become uneasy allies as they work together to break the curse and return their lives back to normal. Or at least as normal as the lives of a pirate and an assassin can be.”