Well, I tried. I put together an interstitial release week post on Friday. Then again Monday morning. And still what’s left in this week’s haul is more than enough to keep all the listening hours in a year occupied. So, since we can’t listen to everything, here are my picks for the week. Since Monday. Luckily, several of them are short. And one of them is even free. However… there are a lot of picks. And this is mostly just from Tuesday.

I’ve been looking forward to Ironskin By Tina Connolly since late last year; it was one of my most-anticipated titles of 2012 in my “too big to be useful” preview of the year. Then I learned it was to be narrated by Roslyn Landor, whose narration of Joan Slonczewski’s A Door into Ocean is up there with my all-time favorites, and my anticipation level, if possible, went even higher. Well, now it’s here, in print and ebook from Tor and in a 9 hrs and 33 mins audiobook from Audible Frontiers: “Jane Eliot wears an iron mask. It’s the only way to contain the fey curse that scars her cheek. The Great War is five years gone, but its scattered victims remain—the ironskin. When a carefully worded listing appears for a governess to assist with a “delicate situation”—a child born during the Great War—Jane is certain the child is fey-cursed, and that she can help. Teaching the unruly Dorie to suppress her curse is hard enough; she certainly didn’t expect to fall for the girl’s father, the enigmatic artist Edward Rochart. But her blossoming crush is stifled by her scars and by his parade of women. Ugly women, who enter his closed studio…and come out as beautiful as the fey. Jane knows Rochart cannot love her, just as she knows that she must wear iron for the rest of her life. But what if neither of these things are true? Step by step Jane unlocks the secrets of a new life—and discovers just how far she will go to become whole again.” 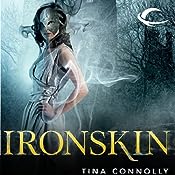 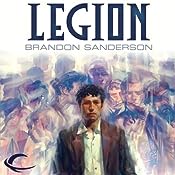 Speaking of anticipated audiobooks, and my favorite narrators, Oliver Wyman (Finch, Gateway, Logan’s Run, on and on and on) narrates Brandon Sanderson’s novella Legion, which was published about two months ago in print from Subterranean Press and ebook by Sanderson’s own Dragonsteel Entertainment. And now here is the 2 hour Audible Frontiers audiobook which iseven  (for a limited time) free: “Brandon Sanderson is one of the most significant fantasists to enter the field in a good many years. His ambitious, multi-volume epics (Mistborn, The Stormlight Archive) and his stellar continuation of Robert Jordan’s Wheel of Time series have earned both critical acclaim and a substantial popular following. In Legion, a distinctly contemporary novella filled with suspense, humor, and an endless flow of invention, Sanderson reveals a startling new facet of his singular narrative talent. Stephen Leeds, AKA ‘Legion,’ is a man whose unique mental condition allows him to generate a multitude of personae: hallucinatory entities with a wide variety of personal characteristics and a vast array of highly specialized skills. As the story begins, Leeds and his ‘aspects’ are drawn into the search for the missing Balubal Razon, inventor of a camera whose astonishing properties could alter our understanding of human history and change the very structure of society. The action ranges from the familiar environs of America to the ancient, divided city of Jerusalem. Along the way, Sanderson touches on a formidable assortment of complex questions: the nature of time, the mysteries of the human mind, the potential uses of technology, and the volatile connection between politics and faith. Resonant, intelligent, and thoroughly absorbing, Legion is a provocative entertainment from a writer of great originality and seemingly limitless gifts.” Any audiobook which begins with Wyman saying “My name is …” is a keeper — that’s how Pohl’s Gateway begins, as does Sanderson’sLegion.

Under Mysteries/Thrillers and Fiction, Mr. Penumbra’s 24-Hour Bookstore: A Novel By Robin Sloan, Narrated by Ari Fliakos for Macmillan Audio. At a bit under 8 hours: “A gleeful and exhilarating tale of global conspiracy, complex code-breaking, high-tech data visualization, young love, rollicking adventure, and the secret to eternal life – mostly set in a hole-in-the-wall San Francisco bookstore.” 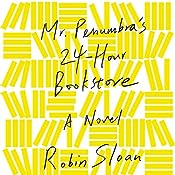 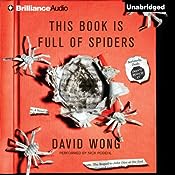 Under Fiction, This Book Is Full of Spiders: Seriously, Dude, Don’t Touch It By David Wong returns us to the twisted — some say cracked — mind behind John Dies in the End. Narrated by Nick Podehl for Brilliance Audio at 14 hrs and 54 mins: “Warning: You may have a huge, invisible spider living in your skull. This is not a metaphor.”

A long-awaited audiobook indeed is Building Harlequin’s Moon (2005) By Larry Niven and Brenda Cooper, one of my favorite science fiction novels of the 2000s combining Niven’s hard sf edge on terraforming and solar kites with Cooper’s human characters. Now in audio, narrated by Tom Weiner for Blackstone Audio at 15 hrs and 27 mins: “The first interstellar ship, John Glenn, fled a solar system populated by rogue AIs and machine/human hybrids, threatened by too much nanotechnology, and rife with political dangers. The John Glenn’s crew intended to terraform the nearly pristine planet Ymir in hopes of creating a utopian society that will limit intelligent technology, but by some miscalculation they have landed in the wrong system. Short on the antimatter needed to continue to Ymir, they must shape nearby planet Harlequin’s moon, Selene, into a new, temporary home and rebuild their store of antimatter through decades of terraforming.” 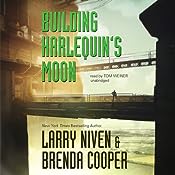 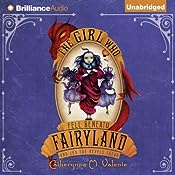 Lastly, young readers (and older ones) can rejoice as we get to return to the world of Catherynne M. Valente’s The Girl Who Circumnavigated Fairyland in a Ship of Her Own Making as book two, The Girl Who Fell Beneath Fairyland and Led the Revels There is out today as well. Book one was voiced by the author, here book two is read by S. J. Tucker for Brilliance Audio at 8 hrs and 18 mins: “September has longed to return to Fairyland after her first adventure there. And when she finally does, she learns that its inhabitants have been losing their shadows – and their magic – to the world of Fairyland-Below. This world has a new ruler: Halloween, the Hollow Queen, who is September’s shadow. And Halloween has no intentions of giving Fairyland’s shadows back.”