Give us a breather, audiobook publishers! The “regular” release week haul (ending Tuesday) was big enough, but already in the past few days another week’s worth (and then some) of interesting titles are out. And: they come in twos!

First up are two from Brian Francis Slattery, both from Audible Frontiers, starting with one of my most-missing of 2012, Lost Everything. Narrated By Michael Prichard it is billed thus: “From the author of the critically acclaimed literary SF novels Spaceman Blues and Liberation comes an incandescent and thrilling post-apocalyptic tale in the vein of 1984 or The Road. In the not-distant-enough future, a man takes a boat trip up the Susquehanna River with his most trusted friend, intent on reuniting with his son. But the man is pursued by an army, and his own harrowing past; and the familiar American landscape has been savaged by war and climate change until it is nearly unrecognizable.” 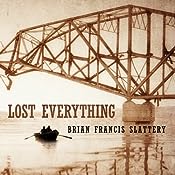 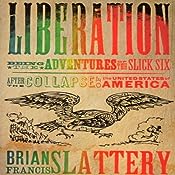 The next pair are two from Blackstone Audio, starting with The Veiled Web by Catherine Asaro, narrated By Caroline Shaffer: “Ballerina Lucia del Mar has two great passions: dance, which consumes most of her waking hours, and the Internet, which brings the outside world into her tightly regimented life. These two passions collide when a White House performance and reception leads to an encounter with handsome Moroccan businessman Rashid al-Jazari, creator of a brilliant technology that has set the Internet rumor mill ablaze.”

And Starfire (The Supernova Alpha Series, Book 2) by Charles Sheffield, narrated By Gary Dikeos: “The year is 2053, and Earth has barely recovered from the Alpha Centauri supernova that destroyed much of the planet’s infrastructure. Now the supernova’s residual effect—a storm of high-energy particles—is racing toward it, and an international effort has been launched out of the Sky City space colony to save the planet. But the controversial plan to build a giant protective shield is falling dangerously behind schedule. A series of unexplained murders has disrupted the Sky City workforce, so much so that a brilliant but monstrous criminal has been enlisted to track down the Sky City killer.”

The next paring is two more from Audible Frontiers (well, three, but bear with me) originally published by Pyr Books, starting with The Horns of Ruin (Pyr, 2010) By Tim Akers, Narrated By Allyson Johnson: “Eva Forge is the last paladin of the dead God, Morgan.Eva, forsaken by her parents and forgotten by her family, was the last child dedicated to the Cult of Morgan. Morgan, God of battle and champion of the Fraterdom, was assassinated by his jealous brother, Amon. Over time, the Cult of Morgan has been surpassed by other Gods, his blessings ignored in favor of brighter technologies and more mechanical miracles. Now, Eva watches as her new family, her Cult, crumbles around her.When a series of kidnappings and murders makes it clear that someone is trying to hasten the death of the Cult of Morgan, Eva must seek out unexpected allies and unwelcome answers in the city of Ash. But will she be able to save the city from a growing conspiracy, one that reaches back to her childhood, even back to the murder of her God?As Eva wields her sword and wits in a city full of wonders, her story becomes the first perfect merger of steampunk and sword and sorcery.” 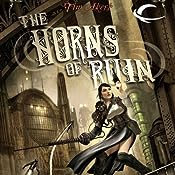 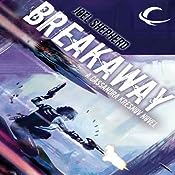 Breakaway: Cassandra Kresnov, Book 2 (pictured, above) and Killswitch: Cassandra Kresnov, Book 3 By Joel Shepherd, Narrated By Dina Pearlman: “Cassandra Kresnov is a highly advanced hunter-killer android. She has escaped the League and fled to Callay, a member of the Federation. Because of her fighting skills she was able to save the president’s life and is now a trusted member of the security forces. However, not all Tanushans are happy to have her on their turf and Cassandra has to tread carefully. As Callay moves towards a vote on whether to break away from the Federation, confusion reigns and terrorist groups plot their own agendas.”

Next up are two from a pair of my favorite narrators, both again from Audible Frontiers, starting with An Exchange of Hostages: Jurisdiction Universe, Book 1 (1997) By Susan R. Matthews, Narrated By Stefan Rudnicki for Audible Frontiers — “A promising young surgeon, Andrej Koscuikso has come, with great reluctance, to study at a military orientation center adrift in black space. Against his will, he will train here to serve as a “Ship’s Inquisitor” – a vocation that runs counter to his deepest moral convictions.” 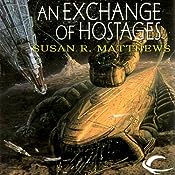 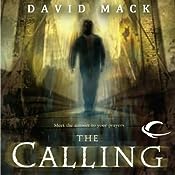 The Calling By David Mack, Narrated By Rob Dean (better known to me as Robertson Dean, frequent narrator of William Gibson books) for Audible Frontiers — “From acclaimed author David Mack comes a gripping supernatural thriller about a man who can hear other people’s prayers for help – involving him in an ancient, ongoing struggle between the forces of heaven and hell. For millennia, a supernatural war has been waged on Earth, with all the souls who dwell there as its pawns. On one side are the Called – men and women guided by guardian angels who defend humanity from its own worst impulses. On the other side are the Scorned – people influenced by fallen angels. Tom Nash is a member of the Called who works as a handyman and makes his living doing odd jobs. He’s 33 years old, married, and a few weeks away from becoming a father for the first time. And since he was 16, he’s been hearing other people’s prayers. So when he hears the prayers of a kidnapped young girl in New York, he leaves his pregnant wife behind to help, unknowingly becoming a key figure in the ages-old conflict between the Called and the Scorned.”

Almost lastly, two more books which, well, I can’t come up with a “theme” for but I’ll group them nonetheless, starting with another of those “most missing audiobooks of 2012” books, The Island By Tim Lebbon, Narrated By Eric Dove for Audio Realms Publishing Company — “He thought he’d seen the worst. No one knew about the Strangers from beyond Noreela, and it was the Core’s job to make sure it stayed that way. Kel Boon was once an agent of the land’s most secret organization, tracking, observing, and eliminating the Strangers as part of an elite Core team. But then one horrifying encounter left his superior officer – and lover – dead, along with many innocents. And Kel has been running ever since. But the worst was still to come. Forsaking magic, living as a simple wood-carver, Kel came to the fishing village of Pavmouth Breaks to hide. But when a mysterious island appears out to sea during a cataclysmic storm, sending tidal waves to smash the village, his Core training tells him to expect the worst. How can he warn the surviving villagers – especially the beautiful young witch Namior – that the visitors sailing in from the island may not be the peace-loving pilgrims they claim to be? That this might be the invasion the Core has feared all along…and that he, Kel Boon, may be Noreela’s last chance?” 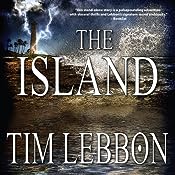 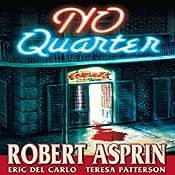 for Audible Frontiers. Clark duly impressed me with his narration on Hal Duncan’s Vellum, and here he takes on the posthumously-published NO Quarter by the late Robert Asprin, who was one of the first authors whose books I devoured, bookworm-like, down the stacks of the public library growing up. Here: “New York Times best-selling author Robert Asprin, writing with Eric Del Carlo and Teresa Patterson, delves into the dark secrets of the New Orleans French Quarter in this suspenseful tale of ghosts and haunted dreams, voodoo, mysticism and swords, murder and revenge, justice and unexpected courage. Fans of Robert Asprin’s Dragons Luck books, the adventures of gambler/dragon Griffen McCandles, will recognize Bone, Maestro, and other denizens of NO Quarter‘s haunted French Quarter from their minor roles in that series. Those fans who knew Bob well will recognize his fictionalized self-portrait in the character of the mysterious, pool-playing swordsmaster, Maestro. Once upon a time, before Katrina….”

Lastly, primarily because I could find no pretense to pair it with another book, is an anthology, Steampunk Specs, with stories by Christopher Barzak, Jeffrey Ford, Margo Lanagan, Sean McMullen, Cherie Priest, Cat Rambo, Michael Swanwick, and Nick Mamatas, narrated By Tom Dheere, Vanessa Hart, and Nancy Linari for Infinivox — “This collection of unabridged, spectacular steampunk speculations includes several classics of the genre. These tales will sweep you away with their amazing automata, daring dirigibles, grinding gears, and scintillating steam as days gone by are infused with tech.” Also available on CD-set direct from Infinivox. 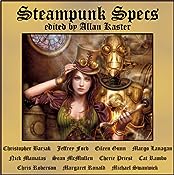