May is for Mur: The Shambling Guide to New York City Listen-A-Long begins tomorrow!

I hope you enjoyed Dave’s The Human Division Listen-a-Long the past couple of months, because we have another one planned for May and June, getting started tomorrow as part of a month-long feature here on The Audiobookaneers, focusing on author, podcaster, and narrator, Mur Lafferty.

Due out in print, ebook, and audiobook on May 28 from Orbit and Hachette Audio, Lafferty’s new series The Shambling Guides gets started with The Shambling Guide to New York City. Great reviews have been rolling in along with other accolades, the latest being the book’s inclusion on io9’s list of Summer Beach Reads That You Won’t Want to Miss, which provides this nifty summary: “Campbell Award-nominated writer Lafferty’s new novel is about a hapless travel writer who doesn’t realize she’s been hired by a publishing house run by monsters. Now she has to write a travel guide to New York City for the undead — and stop a collision that’s brewing between the world of humans and the world of all the other creatures who haunt the city.” 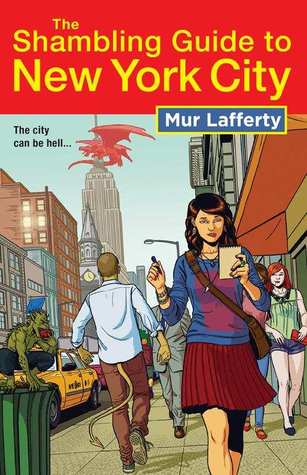 Hachette Audio booked Lafferty to narrate the book, and later this month we’ll feature pictures “in studio” from one of the recording sessions, along with an interview about narrating, podcasting, writing, and I can’t quite remember what else right now. (That’s why I took notes, people!)

But first up, starting tomorrow, Lafferty will be podcasting the first chapter of the audiobook, free! So tune in, and we’ll make it a regular Monday thing to discuss, Listen-A-Long style, the chapters as they come. This time I’ll be your host, and I hope you’ll join me!

This entry was posted in The Shambling Guide to NYC Listen-a-Long and tagged mur lafferty, the shambling guides. Bookmark the permalink.

7 Responses to May is for Mur: The Shambling Guide to New York City Listen-A-Long begins tomorrow!