Whispersync Daily Deal: Brilliance by Marcus Sakey, Into the Black by Evan Currie, and five books by Raymond Feist

Wednesday, December 26 brings a few Kindle Daily Deals with inexpensive Whispersync upgrades to consider, starting with Marcus Sakey’s Brilliance, on sale for $1.99 on Kindle and $0.99 more via Whispersync for the Audible edition narrated by Luke Daniels. “In Wyoming, a little girl reads people’s darkest secrets by the way they fold their arms. In New York, a man sensing patterns in the stock market racks up $300 billion. In Chicago, a woman can go invisible by being where no one is looking. They’re called “brilliants,” and since 1980, one percent of people have been born this way. Nick Cooper is among them; a federal agent, Cooper has gifts rendering him exceptional at hunting terrorists. His latest target may be the most dangerous man alive, a brilliant drenched in blood and intent on provoking civil war. But to catch him, Cooper will have to violate everything he believes in – and betray his own kind.” The Guilded Earlobe loved this audiobook, giving it a rare “A+” and calling it “a smart blockbuster movie for your brain, with a complex and engaging main character, a stunningly created world, and so much action you should probably keep your cardiologist on Speed Dial.” And adding: “It’s a a straight thriller with enough science fiction elements that I want to force all my Speculative Fiction friends to read, at gun point if necessary. I absolutely loved this book.” 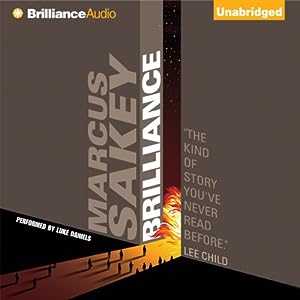 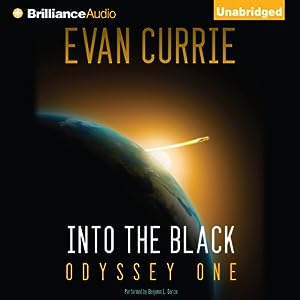 Evan Currie’s Into the Black is also on sale along with the second book in his “Odyssey One” series, available on Kindle for $1.99 and with a $0.99 Whispersync upgrade to the Audible audiobook, read by Benjamin L. Darcie. I reviewed this one a while back: “Currie’s self-published 2011 space sf novel was picked up by Amazon.com’s 47North, polished up, and given a full 2012 re-release in print, e-book, and audiobook. Here, Into the Black sees a new starship, the series-eponymous Odyssey, with a new, experimental long-distance “jump” style drive, captained by a veteran of a more terrestrial fighter pilot squadron, make its first jump, encounter the wreckage of an alien ship, and adventure onward. … Here Darcie’s narration is instantly recognizable as the “classic space sf” mode of narration: clean, dry, and precise, with minimal vocal gymnastics to distinguish speakers. Die-hard fans of space adventure fiction who burn their way through novels and audiobooks will find enough “there” there.”

Also on sale today are 5 books from Raymond Feist, 3 in his Chaoswar series and the first two books of the Demonwar Saga. All are listed at $1.99 Kindle today, with $4.99 Whispersync upgrades to the audiobook editions on Audible. 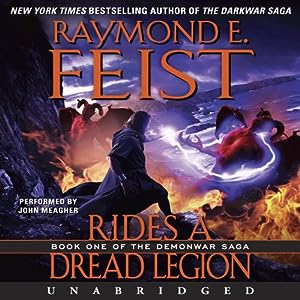 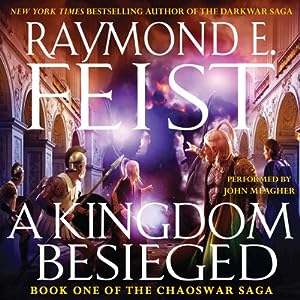