Whispersync Daily Deal: The Golem and the Jinni by Helene Wecker 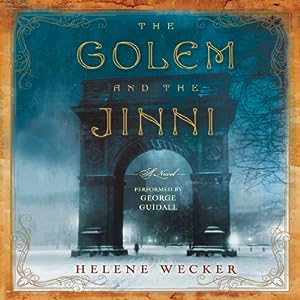 “Helene Wecker’s dazzling debut novel tells the story of two supernatural creatures who appear mysteriously in 1899 New York. Chava is a golem, a creature made of clay, brought to life by a strange man who dabbles in dark Kabbalistic magic. When her master dies at sea on the voyage from Poland, she is unmoored and adrift as the ship arrives in New York Harbor. Ahmad is a jinni, a being of fire, born in the ancient Syrian Desert. Trapped in an old copper flask by a Bedouin wizard centuries ago, he is released accidentally by a tinsmith in a Lower Manhattan shop.”

This entry was posted in Whispersync Deals and tagged george guidall, helene wecker, the golem and the jinni. Bookmark the permalink.

One Response to Whispersync Daily Deal: The Golem and the Jinni by Helene Wecker