Whispersync Daily Deal: The Secret of Ji, Books 1 and 2, by Pierre Grimbert, translated by Matt Ross and Eric Lamb, narrated by Michael Page

Tuesday, January 21, 2014: So. We’ve had quite a run of these “Whispersync Daily Deals” of late, yesterday’s Zoo City following Sunday’s The Golem and the Jinni. Today brings another fantastic pair of fantasy audiobooks, the first two books in The Secret of Ji series, read by the masterful Michael Page for Brilliance Audio. These come from the fantastic French mind of Pierre Grimbert, translated ably by Matt Ross and Eric Lamb for AmazonCrossing. Originally published in France to high acclaim (le prix Ozone, le prix Julia-Verlanger) beginning in 1997, The Secret of Ji: Six Heirs and The Orphans’ Promise (Secret of Ji, Book Two) are the first two books of the series, both published in English last year. The next two books are due out later this year. 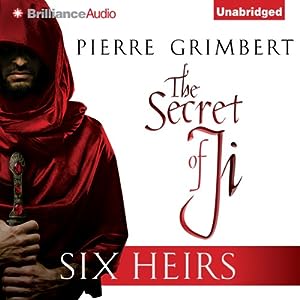 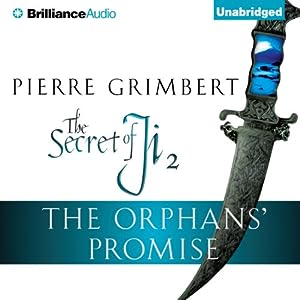 On reddit’s /r/Fantasy last month I wrote a little appreciation, Recommended fantasy that you may have missed: Pierre Grimbert’s Six Heirs: The Secret of Ji, newly translated this year from the prize-winning French editions: “One of the (American) translators was a student in France looking for something to read, and found not much fantasy in the bookstores other than translations of US and British fantasy. Then he found Grimbert’s The Secret of Ji series, and started work on translating the first book. I found the two books translated so far (Book 2 is “The Orphan’s Promise”) to be quite well done, recommended for fans of Michael J. Sullivan’s Riyria series among others. There’s definitely some common ground — delightful characters, continent-spanning intrigues through the eyes of smaller players, etc. — as well as some distinctly French flavors and world-building. For example, time is given in metric: decidays are a couple of our hours, decads for 10 day “week” ish lengths, etc. Assassin cults, low magic, hardened good-guy warriors, animal telepathy, and of course a pair of youngsters coming of age on adventure’s trail. The books are not likely to be “found” in any bookstores, as few stock Amazon-published titles. (These are published by Amazon’s “AmazonCrossing” imprint for books in translation, not its 47North sf/f imprint.) But they can be ordered there (the book is in the IndieBound catalog for example) and sometimes found (or requested) in libraries. They’re also available in audio, read by Michael Page, and that’s how I experienced the books. Page is the narrator also of Scott Lynch’s The Lies of Locke Lamora, Robert V.S. Redick’s Chathrand Voyage, Steven Erikson’s Malazan Books of the Fallen, David Drake’s Lord of the Isles, and (in the US) Joe Abercrombie’s The Heroes; his narrations on all of these has been superb and his work on The Secret of Ji is no exception.”

The translator I mention is Matt Ross, whom I had a chance to interview (podcast) after the publication of the second book. He’s also become a friend, and now I don’t have to bug him about getting together to hand me a copy of the second audiobook after all. So: do head over and pick up the first book on the cheap — $1.99 Kindle plus $0.99 Audible — and give it a listen. Before midnight, you’ll be back for book two.

3 Responses to Whispersync Daily Deal: The Secret of Ji, Books 1 and 2, by Pierre Grimbert, translated by Matt Ross and Eric Lamb, narrated by Michael Page