Wednesday, February 5, 2014: While most of (if not all) the 24 deals I posted Monday are still ongoing, Wednesday brings another explicitly “one day only!” Whispersync Daily Deal, The Rise of Renegade X: Renegade X, Book 1 by Chelsea M. Campbell, narrated by Phillip Russell Newman. The Kindle edition is on sale for $1.99, and the title offers a $2.99 upgrade to the Audible edition. “Sixteen-year-old Damien Locke has a plan: major in messing with people at the local supervillain university and become a professional evil genius, just like his supervillain mom. But when he discovers the shameful secret she’s been hiding all these years, that the one-night stand that spawned him was actually with a superhero, everything gets messed up. His father’s too moral for his own good, so when he finds out Damien exists, he actually wants him to come live with him and his goody-goody superhero family. Damien gets shipped off to stay with them in their suburban hellhole, and he has only six weeks to prove he’s not a hero in any way, or else he’s stuck living with them for the rest of his life, or until he turns eighteen, whichever comes first. To get out of this mess, Damien has to survive his dad’s “flying lessons” that involve throwing him off the tallest building in the city–despite his nearly debilitating fear of heights–thwarting the eccentric teen scientist who insists she’s his sidekick, and keeping his supervillain girlfriend from finding out the truth. But when Damien uncovers a dastardly plot to turn all the superheroes into mindless zombie slaves, a plan hatched by his own mom, he discovers he cares about his new family more than he thought. Now he has to choose: go back to his life of villainy and let his family become zombies, or stand up to his mom and become a real hero.” 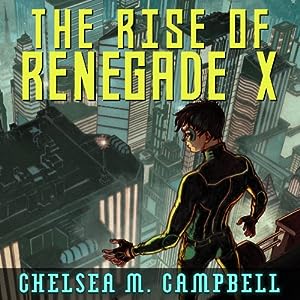 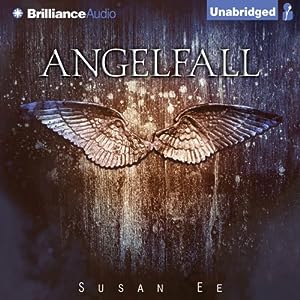 Meanwhile today’s Audible Daily Deal is Angelfall: Penryn & the End of Days, Book 1 by Susan Ee, narrated by Caitlin Davies, on sale for $2.95. “It’s been six weeks since angels of the apocalypse descended to demolish the modern world. Street gangs rule the day while fear and superstition rule the night. When warrior angels fly away with a helpless little girl, her 17-year-old sister, Penryn, will do anything to get her back. Anything, including making a deal with an enemy angel. Raffe is a warrior who lies broken and wingless on the street. After eons of fighting his own battles, he finds himself being rescued from a desperate situation by a half-starved teenage girl. Traveling through a dark and twisted Northern California, they have only each other to rely on for survival.”