Sunday, February 23, 2014: Hot on the heels of being announced as a finalist for the 2014 Audie Awards, Richard Kadrey’s latest Sandman Slim novel, Kill City Blues: A Sandman Slim Novel, is a Kindle Daily Deal today at $1.99. As the Kindle edition offers a $3.99 Whispersync for Voice upgrade to the Audible edition, read by MacLeod Andrew for Harper Audio, it’s quite a discount: 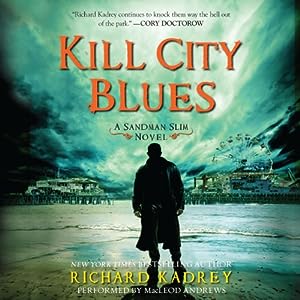 “Another day, another apocalypse. James Stark, aka Sandman Slim, has managed to get out of Hell, renounce his title as the new Lucifer, and settle back into life in L.A. But he also lost the Qomrama Om Ya, an all-powerful weapon from the banished older gods. Older gods who are returning and searching for their lost power. The hunt leads Stark to an abandoned shopping mall—a global shopping paradise infested with Lurkers and wretched bottom-feeding Sub Rosa families, squatters who have formed tight tribes to guard their tiny patches of retail wasteland. Somewhere in this kill zone is a dead man with the answers Stark needs. All Stark has to do is find the dead man, recover the artifact, and outwit and outrun the angry old gods—and natural-born killers—on his tail. But not even Sandman Slim is infallible, and any mistakes will cost him dearly.”