Release Week: The Doubt Factory, Glory O’Brien’s History of the Future, The Lottery and Other Stories, and As You Wish: Inconceivable Tales from the Making of The Princess Bride

OCTOBER 8-14, 2014:  October continues to be a month of bountiful harvests in terms of audiobooks, as my first pass for picks came up with 16 titles to strongly consider. So! After the four picks, do check out the “also out this week” (and perhaps even the “also also out this week”) listings. The “seen but not heard” titles include Julia Elliott’s The Wilds, Blake Butler’s 300,000,000, Beth Bernobich’s The Time Roads, and Kerry Howley’s Thrown, so there’s certainly plenty to read if your ears get tired. Enjoy!

My first two picks are both from Printz Award authors and Little Brown Books for Young Readers. The order is arbitrary — i.e. I kept flip-flopping — and they actually are doing some tour events together anyway, so let’s go alphabetical and start with The Doubt Factory by Paolo Bacigalupi, author of Nebula and Hugo Award-winning The Windup Girl and National Book Award finalist Ship Breaker. Read by Emma Galvin for Listening Library: “In this page-turning contemporary thriller, Bacigalupi explores the timely issue of how public information is distorted for monetary gain, and how those who exploit it must be stopped. Everything Alix knows about her life is a lie. At least that’s what a mysterious young man who’s stalking her keeps saying. But then she begins investigating the disturbing claims he makes against her father. Could her dad really be at the helm of a firm that distorts the truth and covers up wrongdoing by hugely profitable corporations that have allowed innocent victims to die? Is it possible that her father is the bad guy, and that the undeniably alluring criminal who calls himself Moses—and his radical band of teen activists—is right? Alix has to make a choice, and time is running out, but can she truly risk everything and blow the whistle on the man who loves her and raised her?” It’s a Doctorow-esque (Homeland, Little Brother) look from a more Bacigalupian perspective. Get: [Downpour | Audible]

Glory O’Brien’s History of the Future by A.S. King, narrated by Christine Lakin: “In this masterpiece about freedom, feminism, and destiny, Printz Honor author A. S. King tells the epic story of a girl coping with devastating loss at long last—a girl who has no idea that the future needs her, and that the present needs her even more. Graduating from high school is a time of limitless possibilities—but not for Glory, who has no plan for what’s next. Her mother committed suicide when Glory was only four years old, and she’s never stopped wondering if she will eventually go the same way … until a transformative night when she begins to experience an astonishing new power to see a person’s infinite past and future. From ancient ancestors to many generations forward, Glory is bombarded with visions—and what she sees ahead of her is terrifying: A tyrannical new leader raises an army. Women’s rights disappear. A violent second civil war breaks out. And young girls vanish daily, sold off or interned in camps. Glory makes it her mission to record everything she sees, hoping her notes will somehow make a difference. She may not see a future for herself, but she’ll do anything to make sure this one doesn’t come to pass.” Get: [Downpour | Audible] 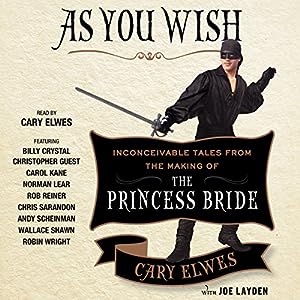 What’s not to like about this? Skyboat Media has put together some fantastic full cast narrations of anthologies and collections over the years, and now sets its sights on The Lottery and Other Stories by Shirley Jackson. Directed by Cassandra de Cuir, read by Cassandra Campbell, Gabrielle de Cuir, Kathe Mazur, and Stefan Rudnicki: “‘The Lottery,’ one of the most terrifying stories of the twentieth century, created a sensation when it was first published in the New Yorker. ‘Powerful and haunting,’ and ‘nights of unrest’ were typical reader responses. This collection, the only one to appear during Jackson’s lifetime, unites ‘The Lottery’ with twenty-four equally unusual stories. Together they demonstrate her remarkable range—from the hilarious to the truly horrible—and power as a storyteller.” Per Skyboat Media, Campbell was directly selected by the Shirley Jackson estate to read “The Lottery”, and her performance gets my stamp of approval as well. Get: [Downpour]

As You Wish: Inconceivable Tales from the Making of The Princess Bride by Cary Elwes with Joe Layden, and foreword by Rob Reiner (Oct 14, 2014) — more information available via an interview with Elwes, and the audiobook is read by the cast of the film including Cary Elwes, Christopher Guest, Carol Kane, Norman Lear, Rob Reiner, Chris Sarandon,Andy Scheinman, Wallace Shawn, Robin Wright, and Billy Crystal. “From actor Cary Elwes, who played the iconic role of Westley in The Princess Bride, comes a first-person account and behind-the-scenes look at the making of the cult classic film filled with never-before-told stories, exclusive photographs, and interviews with costars Robin Wright, Wallace Shawn, Billy Crystal, Christopher Guest, and Mandy Patinkin, as well as author and screenwriter William Goldman, producer Norman Lear, and director Rob Reiner; in addition to never-before-seen photos and interviews with his fellow cast mates, there are plenty of set secrets, backstage stories, and answers to lingering questions about off-screen romances that have plagued fans for years.” Get: [Downpour | Audible | Kindle] 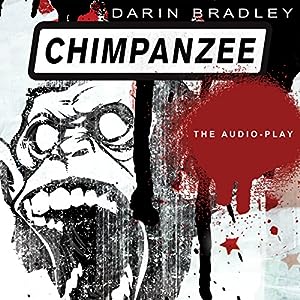 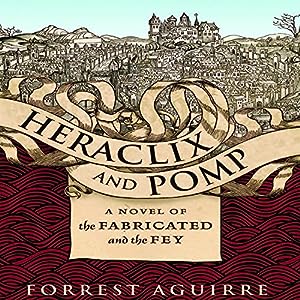 First up, two books published by Mark Teppo’s Resurrection House. August saw the publication of Darin Bradley’s Chimpanzee, to fantastic reviews from NPR and Locus. Now, Chimpanzee is out in a sound-effects and soundtrack-produced audiobook, read by the author for Resurrection House’s own audiobook imprint. “Unemployment has ravaged the U.S. economy. People struggle everywhere, exhausted by the collapse that destroyed their lives. Benjamin Cade is an expert in cognition, and before the flatlined economy caught up to him, he earned his living as a university instructor. Now, without income, he joins the millions defaulting on their loans – in his case, the money he borrowed to finance his degrees. But there are consequences. Using advances in cognitive science and chemical therapy, Ben’s debtors can reclaim their property – his education.”

Heraclix and Pomp: A Novel of the Fabricated and the Fey by Forrest Aguirre is out in audio from Audible concurrent with the print/ebook release, first pitched in early marketing as “an alternative history fantasy set in the Eastern Europe. It features a golem, a faery, and a mad scientist (well, more of 17th century alchemist/demonologist, but it’s the same trope)”. Aguirre’s first full-length novel, it gets a full teaser text treatment as well: “Before being sewn-together, Heraclix was dead—merely a pile of mismatched pieces, collected from the corpses of many troubled men. And Pomp was immortal—at least, so she thought. That was before her impossible near-murder at the hands of the necromancer, Heraclix’s creator. But when playing God, even the smallest error is a gargantuan weakness. When the necromancer makes his, Heraclix and Pomp begin their epic flight.” Narrated By Brandon Massey, whom I last heard on Nick Mamatas’ Bullettime, also for Audible. 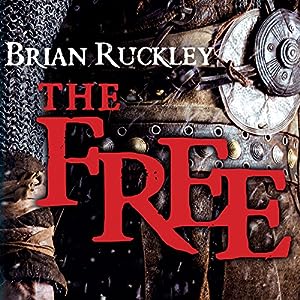 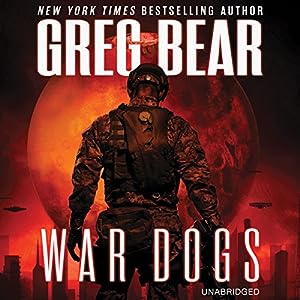 Next up, two from Orbit and Hachette Audio, starting with The Free by Brian Ruckley (Orbit, Oct 14) — Narrated By Bernard Setaro Clark (Hal Duncan’s Vellum) for Hachette Audio — Ruckley’s return to epic fantasy after 2011 urban fantasy/gothic horror The Edinburgh Dead. Here: “They are the most feared mercenary company the kingdom has ever known. Led by Yulan, their charismatic captain, the Free have spent years selling their martial and magical skills to the highest bidder – winning countless victories that shook the foundations of the world. Now they finally plan to lay down their swords.Yet when Yulan is offered a final contract, he cannot refuse – for the mission offers him the chance to erase the memories of the Free’s darkest hour, which have haunted him for years.” More: Ruckley writes about the importance of a well-crafted magic system.

War Dogs by Greg Bear (Orbit, October 14) — “AN EPIC INTERSTELLAR TALE OF WAR FROM A MASTER OF SCIENCE FICTION. The Gurus came in peace, bearing gifts. They were a highly advanced, interstellar species who brought amazingly useful and sophisticated technology to the human race. There was, of course, a catch. The Gurus warned of a far more malevolent life form, beings who have hounded the Gurus from sun to sun, planet to planet, across the cosmos. Pundits have taken to calling them the Antagonists-or Antags-and they have already established a beachhead on Mars. For all they’ve done for us, the Gurus would now like our help.” — Narrated By Jay Snyder for Hachette. 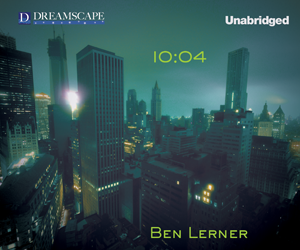 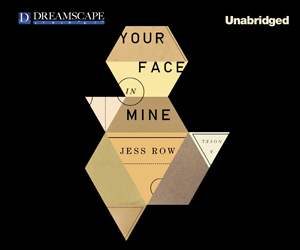 Next up, two from Dreamscape Media, which are out in the world (physical editions orderable in stock, and available through the OverDrive digital audiobook system for libraries) but not (yet) on digital retail sites like Downpour or Audible. First: 10:04: A Novel by Ben Lerner (Dreamscape Media, Oct 13) — published in print/ebook by Faber & Faber on Sep 2 — “In the last year, the narrator of 10:04 has enjoyed unlikely literary success, has been diagnosed with a potentially fatal medical condition, and has been asked by his best friend to help her conceive a child. In a New York of increasingly frequent superstorms and social unrest, he must reckon with his own mortality and the prospect of fatherhood in a city that might soon be underwater.” — appears that the audio was finally available Oct 13, per library listings [Overdrive].

Your Face in Mine: A Novel by Jess Row (Riverhead, Aug 14) — “An award-winning writer delivers a poignant and provocative novel of identity, race and the search for belonging in the age of globalization: One afternoon, not long after Kelly Thorndike has moved back to his hometown of Baltimore, an African American man he doesn’t recognize calls out to him. To Kelly’s shock, the man identifies himself as Martin, who was one of Kelly’s closest friends in high school – and, before his disappearance nearly twenty years before, skinny, white, and Jewish. Martin then tells an astonishing story: he’s had a plastic surgeon perform ‘racial reassignment surgery.” [OverDrive] 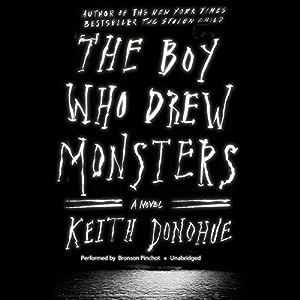 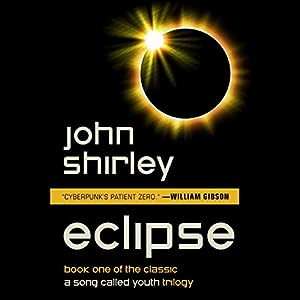 The Boy Who Drew Monsters By Keith Donohue, Narrated By Bronson Pinchot for Blackstone Audio (Oct 13) — out Oct 7 in print/ebook from Picador, a “hypnotic literary horror novel about a young boy trapped inside his own world, whose drawings blur the lines between fantasy and reality” read by the always-fantastic Pinchot.

A Song Called Youth by John Shirley, read by Chris Sorensen for Audible, bringing Shirley’s classic “Cyberpunk’s patient zero” (William Gibson) trilogy to audio. Comprising Eclipse, Eclipse Penumbra, and Eclipse Corona. “2039: The Russians didn’t use the big nukes. The ongoing Third World War has left parts of Europe in ruins. Into the chaos steps the Second Alliance, a multinational eager to impose its own kind of New World Order. In the United States – in FirStep, the vast space colony and on the artificial island Freezone – the SA shoulders its way to power, spinning a dark web of media manipulation, propaganda, and infiltration.” 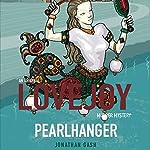 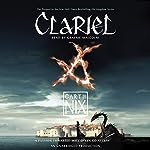 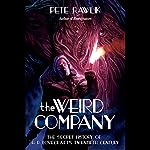 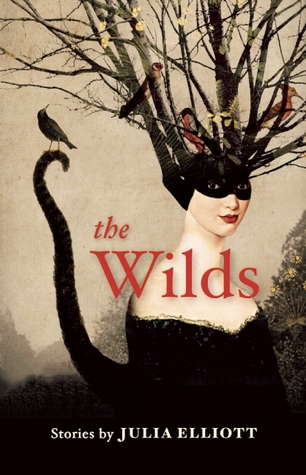 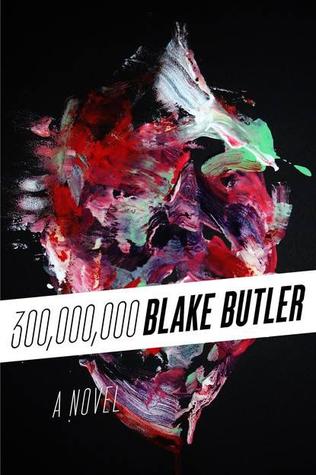