There is No Redemption in the Sea — Dave Revisits THE SCAR! 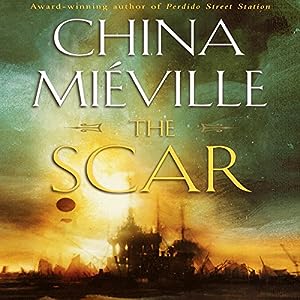 Some books just leave a mark on you. In China Mieville’s The Scar, a character is told “Scars are not injuries…a scar is a healing. After injury, a scar is what makes you whole.” I don’t know whether or not that’s true — or if in the context of the book, Mieville is actually suggesting it’s true. Probably he’s saying it’s a possible truth. Because in this book, every character has their share of scars — be they physical and bloody or emotional and invisible. Sometimes the characters become better for it, and sometimes the characters are broken by them. Whether or not scars make you better or worse, they seem to be defining points in the lives of the characters who inhabit this book. For me, The Scar was a defining point in my reading.

I first encountered The Scar back when it came out almost 15 years ago. I had devoured Perdido Street Station, and was delighted to discover this one. When I discovered audiobooks, I was disappointed I couldn’t find The Scar, because of what it carved out on me. So I was delighted that Random House finally brought it out in the U.S. last year. For those of you who don’t know, The Scar is as wild adventure story as the fantastic and untamed seas that it is set upon. Here be pirates, sea monsters, magic, strange creatures like the Mosquito Women and the Scabmettlers, rogues like the Brucolac and Uther Doel, and heroes like Bellis Coldwine and Tanner Sack.

I’m happy to say that The Scar is an even better book than I remembered it being — where once the ending seemed rushed, I now realize it’s really Mieville’s subversion of popular fantasy tropes, particularly the hero’s quest. In this story, the journey is literally everything. And all the monsters, characters, and crazy-ass worldbuilding he created for this excursion to Bas Lag are as wicked, weird, and intoxicating as ever. I don’t know if I want to live on the floating city that is Armada, but I’d be lying if I said I didn’t want to visit it. What I didn’t remember was how likeable Tanner Sack is (he reminds me a lot of Shadow from American Gods), how perfectly Bellis’s letter works as a coda for this book, and how deep the theme of manipulation runs.

Gildart Jackson had a difficult job bringing all these iconic characters to life. And he does it with aplomb. I’m not quite sure how much I like his interpretation of Uther Doel’s voice, but it was a bold move, and I can understand why he made the choice to read the characters that way. However, his voices for Bellis, Tanner, the Brucolac, Shekel, Silas Fennec, and all the others are perfection, so I’ll take this possible Doel and smile.

I’m happy I took the time to come back to Armada. I’m looking forward to voyaging to Bas Lag again and again, and wearing the scars from this book like trophies.